The world is slowly recovering from a pandemic that froze it for a year and a half. In the midst of this, the world is also living through a decisive moment in its history. In between Rome and Glasgow, decisions are being taken that may mark the end of the century during which we created all the institutions we use today, and the beginning of a future we do not fully seem to grasp.

If we want to make progress on the most important battle of our time – the one for the environment – we need to invent a completely new way of governing globalization.

The G20 final declaration reinstates commitments that had already been undertaken in Paris in 2015. In particular, it aims at lowering to zero net carbon emissions by the middle of the century and containing temperature rises to 1,5 degrees compared to 1850. Despite Mario Draghi's leadership, Italian diplomacy and some new innovative mention of mechanisms aimed at reducing reliance on coal, the political conditions necessary to go one step further were not there. This seems to suggest that it is time to look for a new method.

The terms of the problem are, in reality, quite simple and they're summarized in the graph in this article.

Five big areas of the world (USA, China, India, Russia and the EU) are responsible for two thirds of CO2 emissions that are every year bringing us closer to the point of no return. If the heads of these five governments (which, on a sidenote, calls for the definitive integration of the European Union) were to meet and agree on a plan monthly-monitored, it would be enough to defuse the ticking time bomb we have on our hands.

Actually, it would be enough to get the US and China around the negotiating table to account for 42% of total emissions. Moreover, if the EU were to appoint itself the historic mission of arranging and mediating this meeting, it could find in a peace mission the leadership that it has long lost. 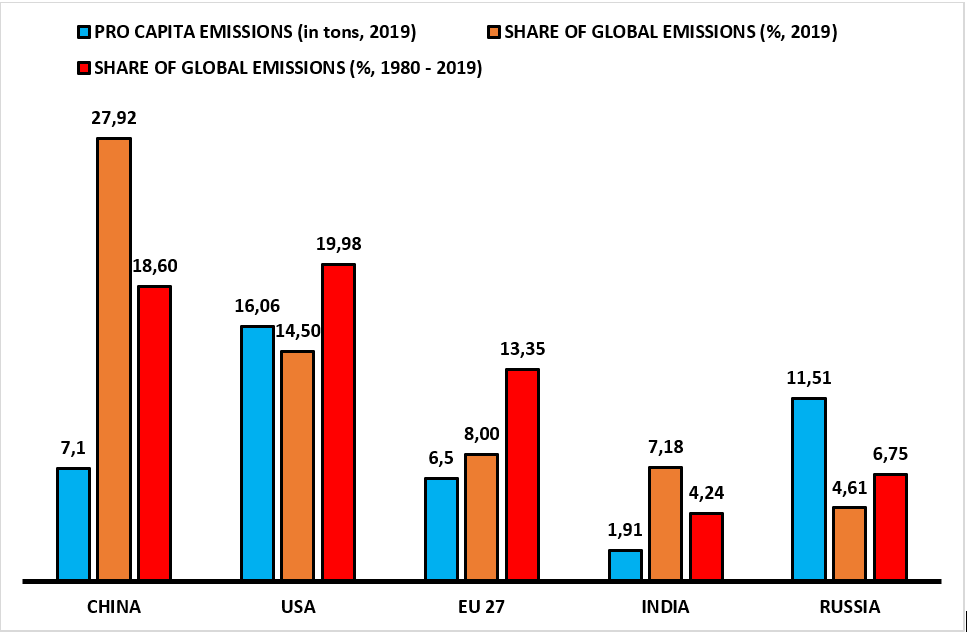 Given their different stages of development, however, interests among parties do not seem to converge. China pollutes twice as much as the US, as noted by US President Joe Biden; but an American pollutes on average twice as much as a Chinese, as noted by President Xi Jinping. As Westerners say, It is true that producing one million dollar of GDP pollutes three times as much in China than in Europe. However, it is also true that the – often basic - needs of 2,7 billion people living in China and in India are different from European's. Indeed, if we shift the calculations from the current emissions to the ones emitted at the beginning of the industrial revolution (which brough us to where we are today), Germany and France alone together emitted more than China.

These few numbers are sufficient to prove what world leaders have reinstated again: we're all on the same boat and if we continue to govern the climate crisis like a cat fight and treat it as a never ending negotiation, we are all going to sink (or burn, depending on where you are). To reverse course, we're in need of more pragmatism and of a vision.

First of all, pragmatism, in order to draw the arguments to succeed from a fundamentally simple framework.

In is not true that the US and China have – besides electoral rethorics – opposite interests. They're among the countries most affected by climate change. Droughts are drying up the Blue and Yellow rivers - the ones that have given life to the great Chinese civilization - menacing the development stability so prioritized by Xi Jinping. The Manhattan subway is getting flooded ever more often, with the water reaching the first floor of some of the most expensive buildings in the world (the last hurricane IDA caused 14 deaths), slowly materializing the American nightmare.

Vision is also needed to realize that China and the US are the countries that most of all are experimenting with solutions. From Tesla on electric batteries in Palo Alto, to the great solar panels factories in China. They're also the ones controlling the supply chain of materials that will be indispensable for the green transition.

A well planned project to reverse climate change can transform a threat into an opportunity.

What is today seen as a cost can be seen as an opportunity for development and innovation. This of course implies abandoning fossil fuel production models – models that have, however, already been sidelined even by the main fossil fuel companies that recognize the end of the road for their traditional industry.

To achieve that, however, we need to go beyond the approach based on summits and goals that are too far away in time to be binding.

A multilateralism composed of 170 governments produces decisions that are too diluted and COP26 starts off with this structural defect. The G20 takes a step forward compared to a G7 which is now nothing but a club; however, it is necessary to find a more efficient way and one that would involve poorer countries more.The necessity dictated by climate change can bring us towards the conception of a new global organization, starting from the limits and merits of the G20 and of the COP: an organization progressively articulated by macro regions and equipped with a permanent structure able to monitor the respect of reciprocal commitments.

We should enter the new centary with the awareness that we're part of the same humanity, share a same destiny and that contemplating problems is no longer sufficient. Problems need to be tackled. Climate change has the paradoxical effect of putting us in front of a crossroad: the old Europe has values that may be decisive and that could bring it at the center of a history that previously seemed to have outrun us.

One issue that is definitely left to settle is how we should behave in between this transition, in between decisions. As much as a regionalized, supranational coordinated option may be the best choice to balance carrots and sticks, we are facing a situation where the prerequisites for such a change are going to surely encounter political, economic and social obstacles. We are also, relevantly, facing a more imminent issue that seems to have been forgotten in the optimistic statements of politicians attending the G20: the energy crisis.

While we discuss how to lower gas emissions we also have to face the fact that we are highly dependent on natural gas, which entails dependency towards the main natural gas exporters (namely Russia). A regionalized approach could also, in this case, be a solution and could serve the double purpose of deepening European integration and ensuring access to natural gas.

The recent decisions of the Spanish government may be a guideline for communitarian approach. The Iberians have indeed put a cap on the price of natural gas and have taken the initiative to create economic buffers to mitigate the impact of rising prices on the population. Moreover, they have called for a European centralized platform to buy natural gas.

The European Commission is currently evaluating this proposal and several elements need to be kept in mind: first of all, as gas sellers have a competitive advantage, the European offer should be appealing, especially vis a vis major demand markets in Asia. Secondly, there would be a need to review gas storage obligations that impact the efficiency of supply and restrict hub trading activity. It would also be important to make it compatible with competition regulations. Although further research is definitely needed in order to evaluate the impact of a possible centralization, having a clear roadmap and common goals could ensure more energetic resilience, could deepen European integration via interdependence and finally it could facilitate international negotiations, as the EU may present a more united front.

Author: Francesco Grillo, Managing Director of Vision and Value, the management consulting firm, advising strategies to major institutions (including the European Commission and Italian Ministry of Economy) and multinationals. He graduated with laude in Economics at LUISS University (ROME), before getting an MBA from Boston University as a Fullbright Scholar. He also holds a Ph.D. from the London School of Economics and Political Science. He has been Visiting Fellow at the Oxford Internet Institute and Academic Visitor at St. Antony's College (University of Oxford), as well as Advisor to the Italian Ministry of Education, Universities and Research.