In our May 2021 Client Briefing, Deconstructing U.S. Fiscal Stimulus, we observed that both the Trump and the Biden administrations have delivered more stimulus in two short years than the economy can absorb. Over that same time, consumers have built up a backlog of pent-up demand that could support many quarters of above-trend spending, which the influx of relief payments and accumulated market income will help finance.

Many consumers have received thousands of dollars in multiple direct payments. A family of four would have received $5,600 under the American Rescue Plan alone. These numbers rise when various tax credits and unemployment assistance are included.1 Thus, it is no surprise that Q2 personal saving was still about $600 billion higher than its pre-pandemic peak. (Chart 1) 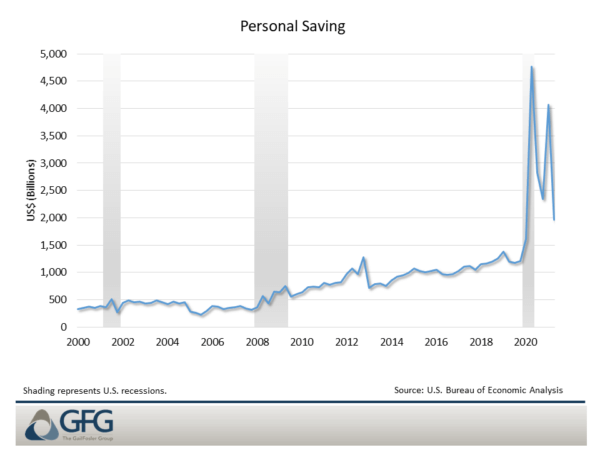 These funds were not tightly targeted to pandemic relief but represented general support for Americans, American families, and social equity. Benefits from the Child Credit and Earned Income Tax Credit, passed in the American Rescue Plan Act of 2021, will pay out largely in 2022. 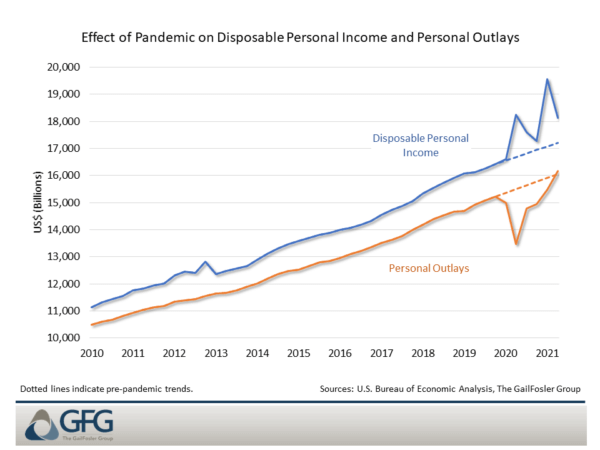 Gail D. Fosler is president, The GailFosler Group, a strategic advisory service for global business leaders and public policymakers. She is former president and trustee of The Conference Board. Fosler served as president of The Conference Board from October 2007 to December 2009. From 1989-2008, she served as chief economist. In 2004, she assumed responsibility as executive vice president for expanding the international presence and operations of The Conference Board. Prior to coming to The Conference Board, Fosler served as Deputy Staff Director and Chief Economist of the U.S. Senate Budget Committee, where she helped develop frameworks and forecasts for congressional budget debates and negotiated on fiscal, monetary, and budget process initiatives for the committee. She is a member of The Council on Foreign Relations and the Bretton Woods Committee, and a former trustee and Executive Committee member of the National Bureau of Economic Research. She is an affiliated expert for the Information Technology and Innovation Foundation, and served as a member of the Bipartisan Policy Center's Commission on Retirement Security and Personal Savings. She has served on the Advisory Panel to the Federal Reserve Bank of New York, the Chatham House Gold Task Force and as a trustee of The Economic Club of New York. She chairs the Board of Directors of the Deschner Corporation, a family-owned manufacturer of hydraulic speed controls and related equipment for industry in Santa Ana, Calif. She is a past director of Shire plc, Baxalta Incorporated, Swiss Re America Holding Corp., Caterpillar Inc., Baxter International and DBS Holdings (Singapore), among others, and a past trustee of John Hancock Mutual Funds. She currently is a member of the board of OurBrainBank, a not-for-profit dedicated to improving treatments and outcomes for glioblastoma (GBM).

Frank Zuroski is an Economic Analyst for The GailFosler Group. He is a recent graduate of Hamilton College with a BA in Economics. He is an Omicron Delta Epsilon Member of the International Economics Honor Society. He has studied abroad at University of New South Wales in Australia, and has previously worked with UBS and Northwest Savings Bank.